Just like that, another summer has come and gone. As the warm temperatures slowly fade into chillier fall weather, it is easy to feel sad over the ending of the beautiful summer we had in 2018. Like most of Ontario, the GTA experienced a much different weather pattern than the previous summer. Summer 2018 was full of sun, hotter than average temperatures and normal amounts of precipitation. This differed from summer 2017, which was dominated by cool and cloudy weather with abundant amounts of precipitation. Let’s take a closer look at the differences between summers 2018 vs. 2017. 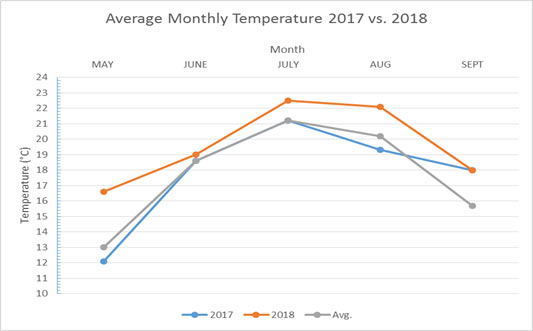 All of the data used for this blog post was obtained from Environment Canada (https://weather.gc.ca/)
The graph above compares the average monthly temperatures of 2017, 2018 and the historical averages. Looking at the overall temperatures from May-September, it confirms that 2018 was warmer than summer 2017 and warmer than historical average. May 2018 started off with a seasonally high average temperature of 16 degrees Celsius, compared to the monthly average temperature of 13 degrees Celsius. The early start to summer temperatures in 2018 lasted right into September, making the summer feel extra-long. In comparison, summer 2017 was cooler than average in May, saw normal temperatures in June and July and then experienced seasonally cooler temps in August. It wasn’t until September of 2017 that we saw some summer-like weather. 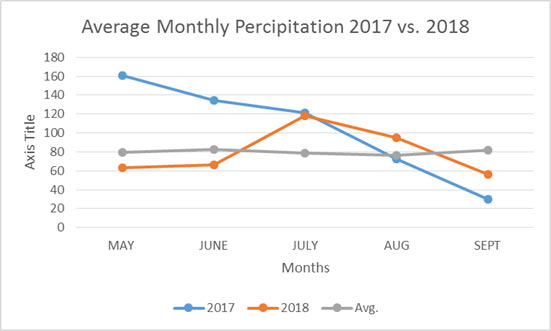